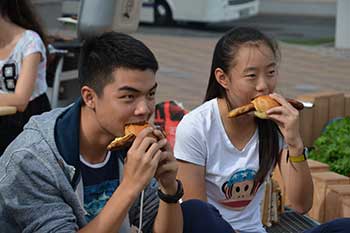 For some years, the language school Neue Sprachenschule Annaberg International has been cooperating with the Experimental Foreign Language School West Campus in Chengdu, China. Interested students visit Annaberg regularly throughout the school year. While residing in Germany, they visit the lessons in a grammar school that is part of our school group, visit famous sights in the country and also get to know German culture and traditions.

In 2015, we started a co-operation with regional public grammar schools. 17 students and two teachers visited the region and attended the classes at the Berthold-Brecht-Gymnasium in Schwarzenberg and at the Matthes-Enderlein-Gymnasium in Zwönitz. The students and teachers integrated their visiting partners into the lessons and organized cultural programs for them during the afternoons. Visits to a local mine in Zwönitz, a hike to the “rider with no head”, a guided tour at the paper mill, a sightseeing tour with the tower keeper in Schwarzenberg and a visit to the mini world “Heimatecke” in Waschleithe were just some highlights during those three days. The hosting schools introduced the Erzgebirge, it’s history and the German language to the Chinese visitors. The students started some international friendships and said goodbye with a BBQ party at the last evening.

The regional editorial department of the “Freie Presse” heard about this wonderful cooperation and wrote two articles in their regional newspapers.
This cooperation wouldn’t have been possible without the help of the headmasters and their representatives of both grammar schools. We would like to say “thank you” and “Xie Xie” to Dr. Löser and Mr. Ullmann and Mr. Vogel as well as all the teachers and students from both schools. Our Chinese guests were enthusiastic about their time in Germany and the Erzgebirge.

In the meantime, two Chinese students have decided to come back to Annaberg and they now attend an intensive German language course to prepare for the school years in a German grammar school.

In March 2016, another exchange is planned between the Filmgymnasium Babelsberg in Potsdam and our partner school in Chengdu. For the third time a German school group is going to visit China during the easter vacation and will get to know Chengdu, life in China and experience the Chinese culture the same we the Chinese students have done in August in Schwarzenberg and Zwönitz.