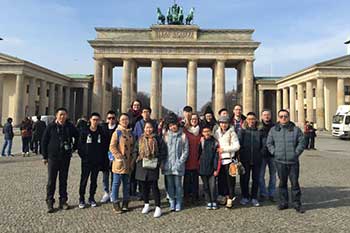 This year, on the 13th of March the Chinese students of the New International Language School Annaberg went on a school trip to Berlin and Potsdam accompanied by their teachers, Mr. Chen, Ms Krautz and Ms Sternicke. Next to a sightseeing tour throughout Berlin, they visited their upcoming school “Babelsberger Filmgymnasium”. On Sunday, the class travelled to Berlin and on the next day started the Berlin city tour at the Reichstag building and went finally on to one of the most famous main avenues in Berlin named “Kurfürstendamm” where people like to go shopping. With two minibuses they could visit a lot of sights in just a short amount of time and during the tour the teachers provided as much information as possible about Berlin and its most important historical facts, both in German and in Chinese. Among others, they visited the following sights: the Brandenburg Gate, the victory column, the Berlin Wall and the Berlin cathedral. The students were very pleased to see all the sights and buildings. One of the German students said: “Berlin is a nice city, much bigger than Annaberg and of course the shopping facilities are great.”

On the third day of their journey, the 15th of March, they finally came to see the school. They visited the building and its special rooms, among them its own cinema and a dancing studio. In the morning they had the chance to take part in school lessons as well. According to their own interests they participated in language classes (German, English and Spanish) and in science classes (maths, Chemistry, Biology). They did not only get a first impression on how a typical school day is, but also got the chance to talk to other German classmates. Their résumé was very positive in regard to school facilities, teachers and teaching. One of the Chinese students stated that in chemistry they were talking about “salt”. They read a text about it and did some exercises. After that they discussed the topic with German students. All in all they are glad to visit this school starting next summer for a three-or four-year period.