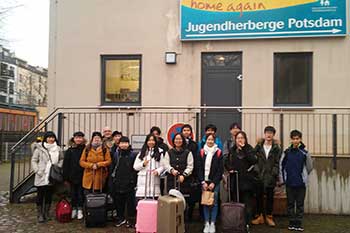 On the 11th of February 2018, the Chinese and Vietnamese students of the New International Language School Annaberg went on a school trip to Berlin and Potsdam accompanied by their tudor couple Mr and Mrs Scheffel, their teacher Nancy Krautz and their headmaster Uwe Weisbrich. The students visited their future school „Babelsberger Filmgymnasium“ as well as some famous sights in Berlin. On Sunday, the 13th of February, they arrived at the youth hostel in Potsdam. The following day, the sightseeing tour through Berlin started in a double-decker bus. During the tour the students were provided several information about Berlin by a guide. Later, they had a lot of fun while visiting the legendary wax works of „Madame Tussauds“ at the Brandenburg Gate. Afterwards, the students had time to stroll around and go shopping on the famous shopping avenue „Kurfürstendamm“. On Tuesday, the 13th of February 2018, the students visited their future school „Babelsberger Filmgymnasium“. They will attend grade 9 or 10 from the school year 2018/19. The students could visit the building with some special rooms such as the in-house cinema and the dancing studio. Apart from that, they had the chance to attend various classes of different grades. In small groups, the students took part in German, English, Maths and Engineering as well as Biology classes. Thus, they did not only get to know the school routine but also got a first impression of the classes at a German high school. Overall, their résumé was very positive in regard to school facilities, teachers and teaching. One of the students stated that in Biology class they were talking about „photosynthesis“. They could actively participate in class and did some exercises. Some of the students were also able to discuss the topic with German students. All in all, the students enjoyed their first visit and they are glad to attend this school starting next summer.